You might have read the title and thought: that doesn’t sound very interesting or consequential! And perhaps you’re right, but I wanted to write a blog about an interesting design feature I’ve noticed on recent Greater Manchester walking and cycling junctions. Note, this only applies to those which use bi-directional cycle paths and crossings: many of the simpler “CYCLOPS” designs only have single-direction cycle paths and so don’t have this feature. I am talking about a peculiar central island at the start and end of each cycle crossing. Here is a photo of an existing one at Deansgate Interchange, Saddle Junction, and a plan of new ones being built at Princess Road Roundabout 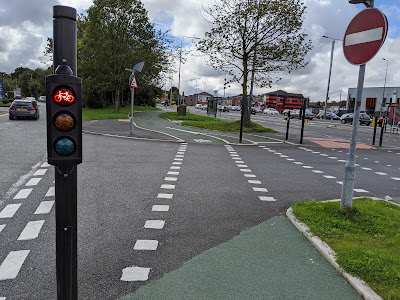 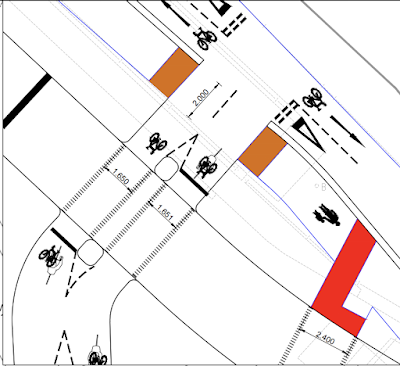 New layout being built at Princess Road roundabout
All signal junction designs for the 10 Greater Manchester councils go through Transport for Greater Manchester’s Urban Traffic Control team for design input and other centralised resources such as modelling, staging etc. So I think it’s possible to suggest that the TfGM UTC team is suggesting/specifying this island, which could be why it’s showing up on every bi-directional crossing across all the councils. I am unsure of the rationale, obviously it provides a nice place to mount the second low level cycle signal as can be seen above, I wonder if there’s a fear of oncoming cycle collisions too?
As we can see from London examples, bidirectional crossings can be built without this island.

First 4 seconds: “See, why are we wasting money & space on bike-lanes nobody’s using?”

The main issue I have with it, is that it narrows the cycleway. As you can see in the plan above, for a ~4m wide footprint, we only get 1.65m for each direction of cycles. This is barely wide enough for two abreast if riding very close together, but most people will go through this pinch point in single file. Since cycle stages are often quite short on large roundabouts like this (except when “hold the left” phasing is used), this means that the cycle capacity is often quite low.

In the summer, there was an A56 popup cycleway support ride, and a few of us went across Deansgate Interchange. Due to the low capacity of the crossing, and short green times, it took us 4 signal cycles, and several minutes, to get all 30 people across the junction.

The Dutch have known for a while, that not only is a large effective width at crossings vital for high capacity, but also a “chip cone” shape of crossings can improve capacity. As BicycleDutch’s brilliant article and video explains, the optimal shape for a cycle crossing is as below: 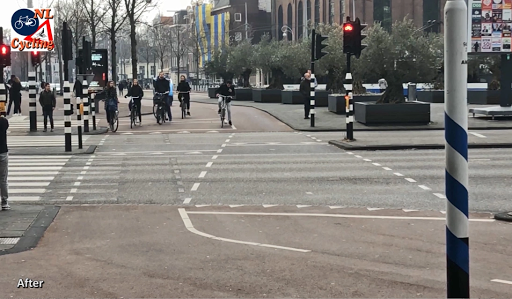 This so called “chip cone” means that many cyclists can queue abreast of each other, which increases the number who can go through the junction when the signal goes green. People naturally overtake each other and narrow out due to differences in riding speed, meaning the entrance to the cycle path on the other side can be much narrower. The same happens for cycles in the other direction. This allows a much higher capacity than if the crossings were painted straight, and certainly a higher capacity than if there was a central island.
I’d love to see some rationale for the central islands we are building in crossings like this in Greater Manchester, perhaps there’s something I’m missing!