This week, Manchester council published updated plans and timelines for the Levenshulme Active Neighbourhood. The council’s own wording can be read here but to summarise:

First, we should look at the impact that these changes will have on how the active neighbourhood works. Thanks to “Streets for People“, there is an excellent image that neatly demonstrates the benefits of the proposed layout from earlier this year (click for a larger version):

As can be seen wonderfully from the image, the original plans were a “perfect” filtered neighbourhood that splits the area into a number of “cells”, each of which only has access from one main road. This means that “rat running” (cutting down residential streets in a car to avoid queues or traffic signals on main roads) is no longer possible.
In the last 10 years alone, traffic volumes on unclassified (read: residential) roads have increased by nearly 50% while traffic volumes on A Roads and B Roads have stayed at the same level. This is likely due to the A & B Roads being at full capacity, and the proliferation of sat nav apps which direct users down residential streets to save a minute or two. 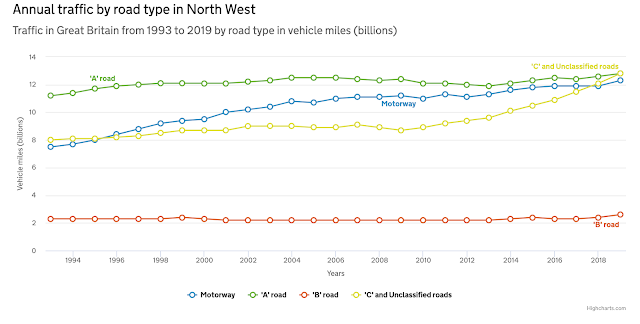 In the old plan, the A and B roads in the area are already pretty much at capacity, so by reducing the overall traffic capacity of the area, less driving would inevitably take place, due to a phenomenon known as “traffic evaporation” where reducing the capacity of the road reduces the number of cars using it. This is because people either take a different route avoiding Levenshulme (i.e. the ring road), make journeys at different times, make them by different modes (walking, cycling, bus, aka “modal shift“), or don’t make the journey at all (perhaps they consolidate multiple into one). The old plan also allowed people walking and cycling to take the most direct route, making active travel more convenient than driving, discouraging car use for local trips. Evidence of this can be read here.
However, in the new plan, the area is no longer a “perfect” LTN (low traffic neighbourhood), but what is sometimes called a “leaky” one, where there are significant gaps in the filters that allow drivers to continue to cut through many residential streets. Indeed, it could be argued that the new plans for Levenshulme are so leaky as to not really be an LTN at all.
I have done my best to draw the impact of the new plans. An interactive map can be found here, or see the screenshot below: 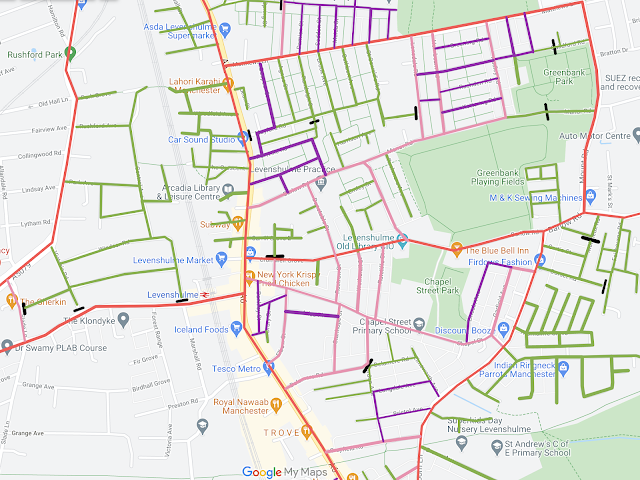 In this new map, the black lines are the proposed 14 modal filters. I have marked the designated through routes (a.k.a. “main roads”) in red. Then, using the available evidence and some personal judgement, I have marked streets in either green, purple, or pink. Green streets represent filtered streets, or streets where the only motor traffic is likely to be residents and deliveries. Purple represents a possible through route for motor traffic, but not necessarily very busy, and pink represents roads where it is both possible and convenient for motorists to rat run.
As you can see, there are still a number of green streets (some historic due to pre-existing filters and culdesacs) which represent good walking and cycling conditions, however they are now not well joined up, with plenty of rat runs between them. This means it will be much more difficult to find a quiet and pleasant walking and cycling route through the area, than if the original plans had been implemented. In particular, the Fallowfield Loop offroad cycle path that links to the rest of South Manchester, and the city centre via Wilmslow Road, is no longer accessible via quiet streets, with Crayfield Road being a major rat run between the A6 and B6178 Broom Lane.
There is also now little reason for drivers to give up their cars for short trips within the area, as they can still easily bypass the filters, so the modal shift benefits may not be so strongly felt.
This is a poor downgrade from the original plans, and it is extremely odd, since MCC themselves state that over 2/3 of the comments were in favour of an LTN. The original engagement site made no mention that there would be “referenda” on individual filters, with individual ones being removed if support was not high enough. Modal filters work in tandem to prevent through motoring in an entire area, simply removing one without repositioning others leaves an area exposed to rat running. Removing 11 can have a catastrophic effect on the usefulness of an LTN, as can be seen above.
It is good to hear that a further five may be reinstated later in the trial, and I hope that MCC can swiftly redesign and implement these ASAP. However, the cancelled modal filters must be reconsidered: the scheme simply cannot work with multiple rat runs left open.
I thought I’d look a bit closer at the rationale for cancelling some of the filters. Atlas Place (purple on my above map) has been a culdesac for a while now due to construction. Manchester council says: “The proposal for a filter at Atlas Place received neither positive nor negative feedback, and so will not be progressed at this stage”. However, when looking into the publicly available data from the Commonplace Engagement (available here, in raw JSON form), I could not come to this conclusion myself. There were a total of 7 responses for Atlas Place. 4 of these were clearly positive, 1 was marked neutral (with a positive comment), and only 2 were negative. 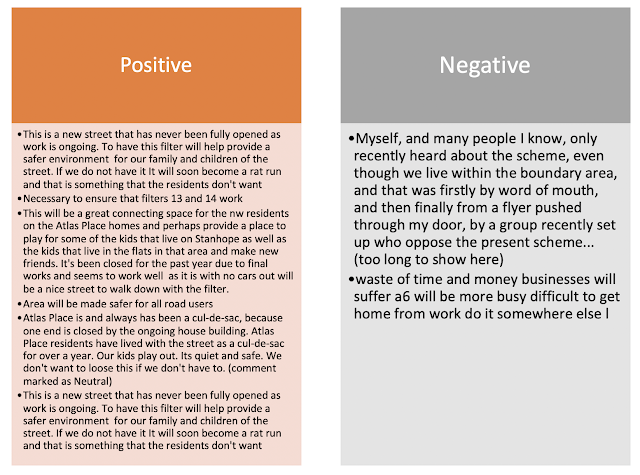 Its worth nothing that all but one of the positive comments mentioned Atlas Place itself, and how the filter would help the local area. The two negative comments did not. Indeed, the top comment, which was too long to replicate here but can be found in the raw data, was an unrelated rant about the whole scheme, which was copy and pasted onto every filter.
Therefore, from this data, I don’t think there can be any doubt that there was overwhelming support for this filter. Indeed, one commenter was quite right in saying that this filter was needed for two others to work. And its removal now means that the area is completely open.
Manchester Council need to release how they analysed the data (as well as comments they received by email or physical media), because this discrepancy looks a little odd.
I am glad the trials are finally starting. I would like to see the removed filters reinstated as swiftly as possible, at least only for a trial, because otherwise I am not convinced the trial will have the positive effect desired and it may harm the business case for full funding to be released.
I would also like to see the promised trial crossings over main roads, and the promised school streets, to really help give people the option to leave the car at home and make that modal shift happen.
Post Views: 51