It has been 6 months since my last post on Hyde Road, it’s time for an update, as there has been new information.

My last post explained some serious issues that had been found with the consultation, where the council had deliberately misclassified comments who profoundly disagreed with the scheme as “neutral” to make the scheme seem more popular than it really was. This was explored further by Andrea Sandor in her excellent post for Manchester Confidentials, including an attempt at justification from the council:

Comments criticising the lack of a cycleway were categorised as neutral, reflecting the fact that it was impossible to satisfy those who wanted the inclusion of a cycleway, because funding is not available to deliver this element.

So it seems that if a scheme doesn’t have funding to implement basic pedestrian/cycle safety features, the council thinks that all comments even mentioning anything of the sort should be classified as “Neutral” even if they had significant issues with the rest of the scheme. Quite how this aligns with MCC delaying schemes such as Chorlton Cycleway and Levenshulme Active Neighbourhood due to complaints from motorists, I don’t know, since the funding for these schemes is purely for walking and cycling and so motorists comments should have been categorised as “neutral” by this logic.

Let’s ignore that, and focus on WHY funding was not available to deliver basic pedestrian and cycle safety. A quote from the same response reads: “We applied to the Greater Manchester Mayor’s Challenge Fund for funding to include a cycleway in this project, but unfortunately, this bid was declined”

This is a line the council has used a lot for this scheme, and we touched on this in my last post, linked above. It seems the wording of this is carefully written to shift the blame to GMCA/TfGM for not providing the funding, rather than to MCC for not producing a good enough bid to secure the funding. As I mentioned in my previous post, I got hold of the bid document and it was rather poorly written with typos and missing/incorrect information. Therefore I decided to FOI Request more info from TfGM as to why the bid failed, the response to which can be seen here.

TfGM sent over several documents regarding MCC’s bid for funding from the Mayors Challenge Fund to implement basic walking and cycling safety features alongside the widening scheme. The first of which can be seen below, an excerpt from an email from TfGM to MCC advising that the bid would not succeed in its current form due to a lack of integration into the wider network, and very poor value for money, asking ten times as much per kilometre as the Wilmslow Road cycleways.

Another document outlines a similar story, that MCC had made little to no effort to demonstrate how the scheme would tie into the wider network. The Fallowfield Loop runs on the bridge above and was proposed to have just stairs for access with a wheeling ramp. Of course as we know, after people complained that stairs aren’t accessible to all, MCC have since removed them from the plans completely so everyone is equally disadvantaged. There also appears to have been little to no evidence of MCC getting in touch with Tameside to link this scheme to the Tameside ambition of having the whole A57 walking and cycling friendly.

This document makes it clear that TfGM explicitly advised MCC that the scheme would be unlikely to succeed in the current form, and yet it appears it was submitted like this anyway. It seems that the submission of this scheme might therefore only be so that MCC could state in future announcements that they had applied for funding but it was declined (which is exactly what they’ve been doing). It appears to me that TfGM explained clearly what MCC needed to do to give this bid a better chance at succeeding and it appears little to nothing was done. Therefore it cannot be a surprise to MCC that the bid failed and any attempt by themselves to shift blame onto TfGM for this failure is cynical and unfair.

The council have recently had several press opportunities where they have taken photos of officers and councillors standing on the new bridge. Looks are subjective but I think most can agree the new bridge is more attractive than the old one, however the old one was definitely more historic. There’s also the issue where before you were shielded well from the noise and pollution of the road below by the high walls (indeed, it was hard to know you were even crossing a road), whereas now that is not the case with the more open design.

On Tuesday, I formally opened the new bridge over Hyde Road, re-completing the Fallowfield Loop. The off-road path covers 14 km of our great City of Manchester from Chorlton, through Fallowfield & Levenshulme to Gorton & Fairfield 🚶‍♀️🧑‍🦼🚴 pic.twitter.com/PLoL8NLKPO

What is never mentioned however is that the old bridge was 7m+ wide, and the new one is 4m. Considering that there is an open consultation for the Fallowfield Loop and one of the most popular suggestions is to separate pedestrians and cycles, which needs at least 5.5m width to be done properly (3.0m cycle path, 0.5m separator, 2.0m footway), it’s ironic that the Hyde Road scheme removed a “pinch point” on the road, and added a new one on the Fallowfield Loop.

Something also mentioned beforehand, both online and directly to officers and councillors at the consultation event, was concern that the more open bridge design would allow for people to throw stuff off the bridge onto vehicles below.

More worried about local troublemakers throwing stuff over the bridge onto the cars below. Both bridges you’ve shown are over rivers!

And indeed recently, due to a problem with kids throwing stuff off the bridge onto the road below, and I hear even climbing on the outside of the bridge, “temporary” scaffolding barriers have had to be installed. I do wonder what the long term plan is, as these barriers are further reducing the already low effective width of the bridge, as well as removing any subjective aesthetic advantage the new bridge had over the old one, but this is just another case of the council not listening to legitimate comments at the consultation and ploughing ahead regardless. 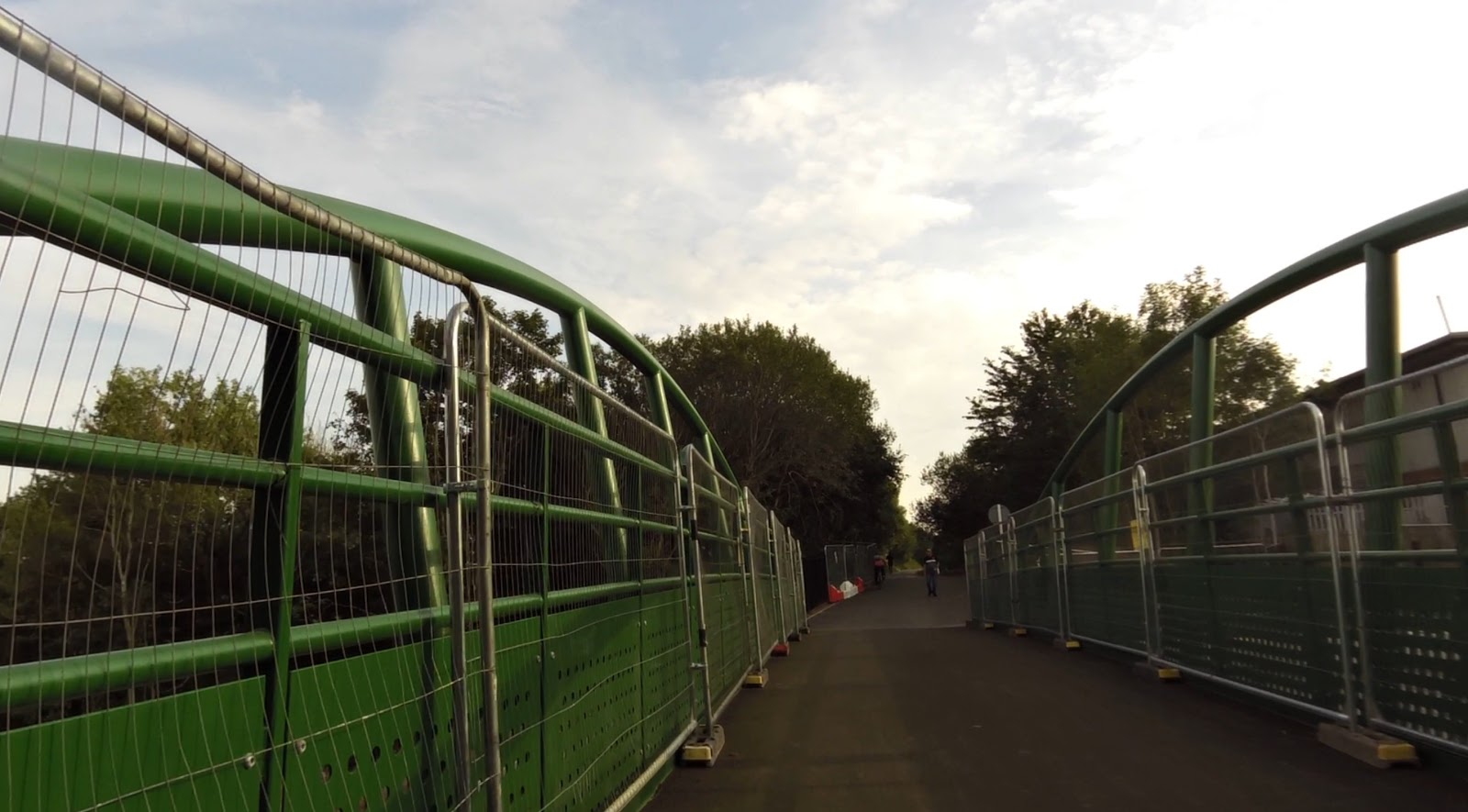 Not a hugely positive 6 month update then. Unfortunately not, but I think it’s important these failings are out in the open so that they can be prevented on future schemes. The road widening is still ongoing below the bridge, let’s hope this is all the bad news out of the way and everything else goes as smoothly as is possible for 1960s-worthy plans being built in 2020.
Post Views: 6