The news came out today that the council is about to finish works on Regent Road, which forms part of the Manchester and Salford Inner Ring Road (MSIRR) that encircles the city centre. These works have been ongoing for over a year now and will provide about 20% extra capacity for motor vehicles. Ignoring the effects of induced demand, where when you widen a road it just attracts more vehicles and congestion stays the same, or the effects we are already seeing where this junction is more efficient but the M602 roundabout is now busier, how do the plans fare for walking and cycling? The council insists that the crossings are better. But are they really?

Of course it’s worth noting that the junctions beforehand were not good for walking or cycling, but the comparison is still important. Surely a junction designed decades later, with all we know now, should have great active travel provision?

I will compare several cycle routes from before and after the changes. I will draw the route you must take in green, and use red lines for crossings where you might have to stop. Due to timings, you might not have to stop at every single one every time, but in a worst case scenario, you will have to stop at most if not all. 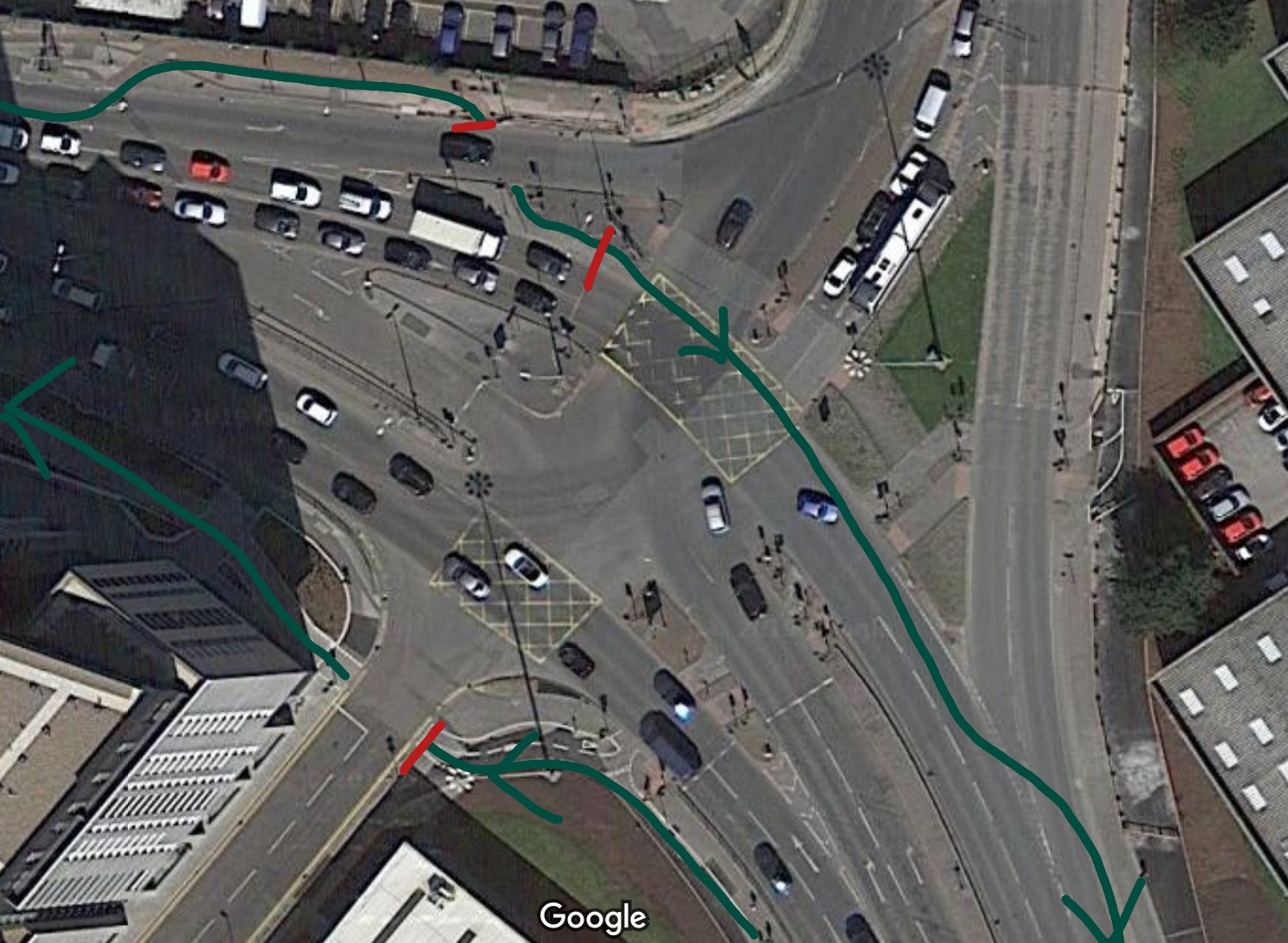 On the before image we can see this is relatively stress free. Going towards Hulme, you leave the road into a segregated cycleway, and there’s a crossing over the left turn lane. Then you rejoin the road in a painted cycle lane and might have to stop again before you can go straight on with the cars. Being in a painted cycle lane is not pleasant, but as the left turn traffic was removed, you know no one will turn over you so this isn’t terribly unsafe, if not that enjoyable. Then you simply veer left onto the other painted cycle lane and you’re away to Hulme.
Min Stops: 1,  Max Stops: 2.


Away from Hulme is even simpler. You’re completely away from the road and there’s a crossing of Water Street. This crossing has give way lines rather than lights. As Water Street is a dead end and low traffic, you could often do this without stopping at all.
Min Stops: 0, Max Stops: 1. 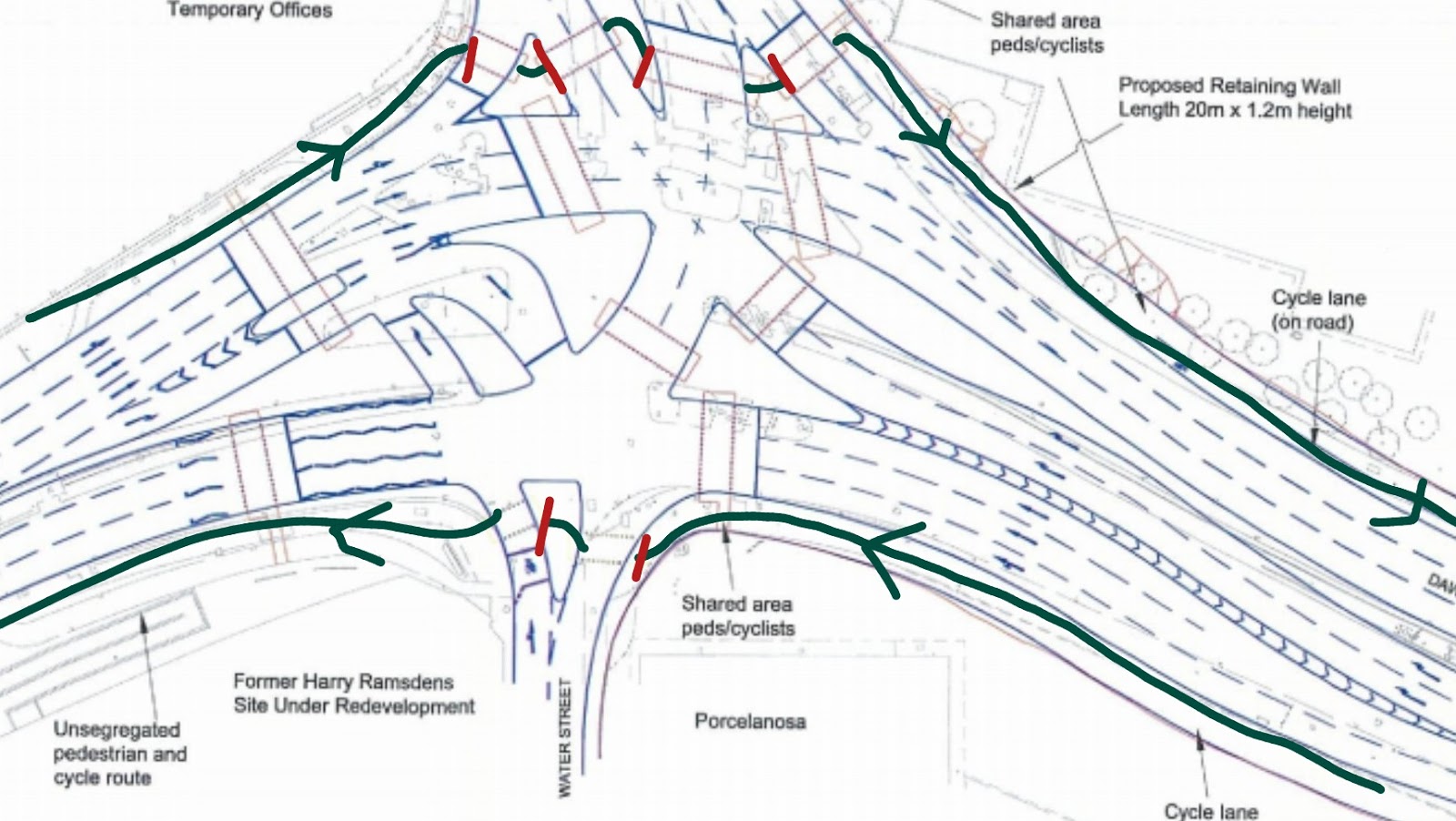 The after image is rather sad. Across the board, cycle lanes and cycleways have been completely removed. Pedestrians and cyclists now share the same narrow paths and small islands, to the detriment of both modes. And to make any crossing, you must now do it in multiple stages. Towards Hulme, you now have to make FOUR crossings, zigzagging around on these tiny islands with guardrails which is downright difficult on a normal bike, impossible with a trailer. While the light phasing might be such that this can be done in less than the maximum of four stages, it seems impossible that it could be less than two or three.
Min Stops: 2?, Max Stops: 4.


The away is no better. What was a straight crossing over a small road is now two stage, with another staggered island shared with pedestrians. The only good thing about Toucan crossings (crossings shared by pedestrians and cycles) is that cyclists can legally treat the red man as advisory like pedestrians, so if there’s low traffic you can legally cross on red. But the stagger of the island means that what was a give way before with a potential zero stops, is now:
Min Stops: 1, Max Stops: 2.


The other routes fare similarly. The before situation was dire enough, but the after situation is actually a huge step backwards, embarassing for a city that’s declared a climate emergency, wants to cut down on illegal and lethal air pollution, and wants to limit car use in favour of walking and cycling. One might say that to remove cars from the city centre you need a working ring road, to which I agree, however you also need excellent crossings of said ring road if you don’t want your city centre to be completely cut off from the surrounding areas. As it stands, Deansgate Interchange and Oxford Road are pretty much the only two acceptable crossings of the ring road, all the others massively put people off from walking and cycling, and to make a mediocre one into a terrible one is going backwards.
For completeness, the works also took place on Deansgate Interchange. This had semi decent crossings already, which have been moderately improved. The waiting islands are bigger, and there’s a new crossing of Chorlton Road to remove a previously unsignalised dash across three lanes. However, it does have some boneheaded design decisions such as adding an extra lane into the city centre from Chester Road, and a Scalextric crossover for cyclists. Don’t believe me? 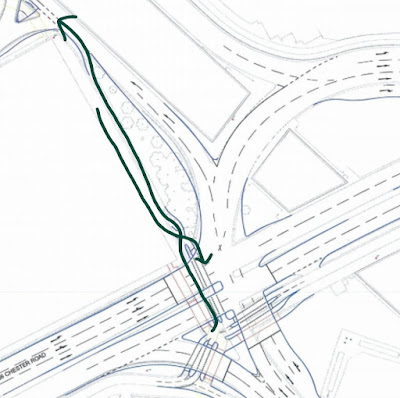 Yep! Cyclists going northbound are expected to use the existing cycle lane that merges with the northbound road. Cyclists going southbound are expected to use the shared pavement. And at the junction, the two tracks cross over each other scalextric style. If that’s not proof the designers don’t really care about cycling, I don’t know what is. When did they last crossover two car lanes like that?
These junctions will need digging up again in less than 5 years at huge expense to add the crossings they desperately need. No joined up thinking at Manchester Council!