Update: One of the councillors has stated that the scheme has now been stopped due to feedback today and the council will be working with Chris Boardman’s team to develop a walking and cycling route along the length of Hyde Road! Fantastic news.

On the tables were plans of the road, as well as photos of the new bridge (below), and other schematics to do with the bridge and walls. 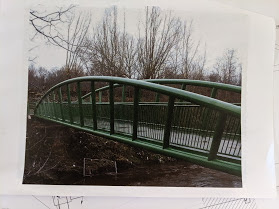 I think the new bridge is quite attractive but the people there were unable to give me a definite width. I was told it was about the same as the existing one but the pictures look nowhere near as wide. Perhaps the new one will be of the same design but wider? The current bridge is 7 metres wide. (Note I am talking about the width as you are cycling across it, not the length that it spans over the road which will obviously be longer as it’s spanning 4 lanes rather than 2).
Now for some history on the scheme, as it was told to me. The scheme is a central government pinch point scheme. The plans originally had segregated cycle lanes. 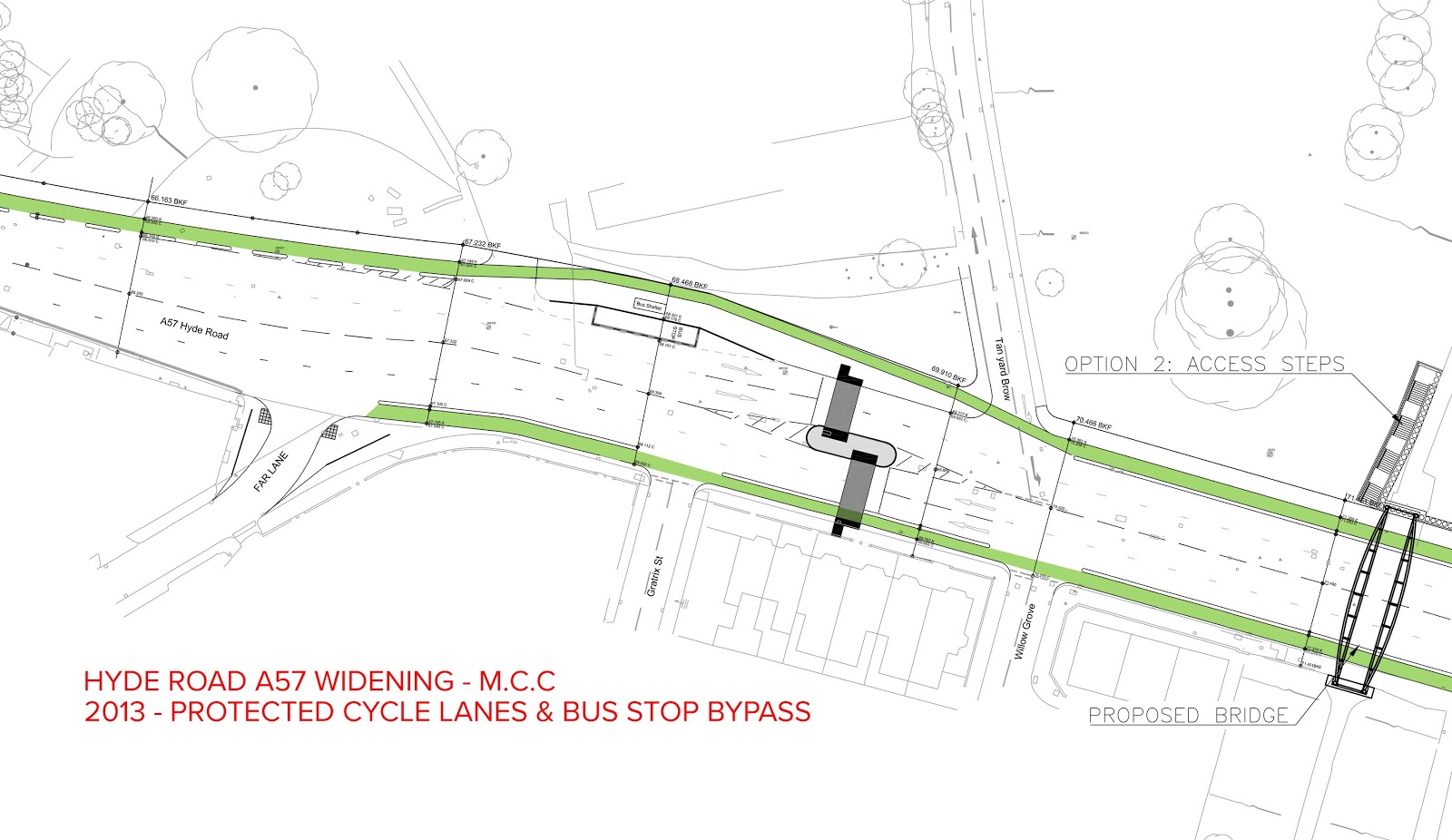 I was told that this was why the scheme was delayed for so long, they wanted to get extra funding for the cycleways (I’ve since heard that the delay was due to the land ownership). When the Bee Network came about, they applied for funding to build them but was declined as the scheme was “only 300 metres”. This seems a bit odd, as Princess Road roundabout is a similarly small and disconnected scheme yet has Bee Network funding because TfGM understand that it makes sense to spend a little now to get cycleways that can be tied into later, rather than spending a lot of money later ro dig it all up again. It would make total sense for a small bid to build the above now as it will not be possible later without completely ripping up the entire carriageway and footway again as the alignments are all wrong. 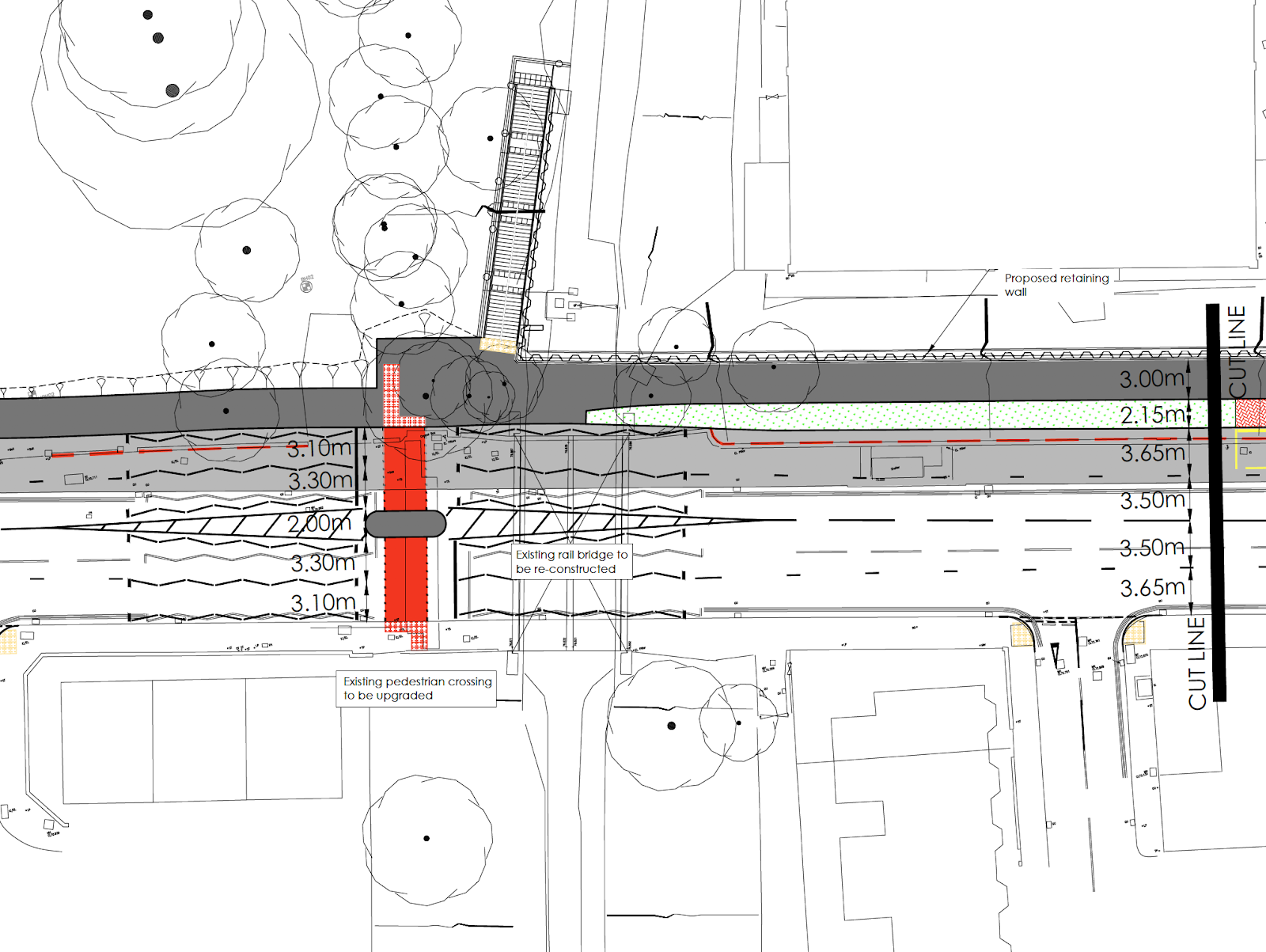 These are the current plans. These plans if built would completely lock out the potential of cycleways on either side of the road, instead forcing a bidirectional cycleway on one side of the road. The plans have 5.15m on the top, but 2.15m is given to a grass verge which is a large waste of space, and pedestrians and cyclists are squeezed into 3.0m which is far too narrow for a shared path. There really isn’t much room here to add a future cycle scheme without ripping up the whole road again, so getting this right now makes perfect sense and provides far better value for money.
As for suggestions I and others made (assuming that it was impossible to get proper cycleways): 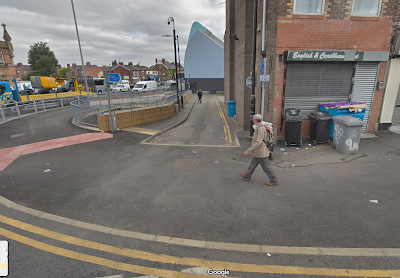 Unfortunately this event gave me the impression that pretty much everything was set in stone. It wasn’t really a consultation at all. Despite the promise that lessons were learned from Great Ancoats Street and it would not happen again, the exact same thing is happening again. Cycling is being locked out because there isn’t the ambition to do it correctly now. I’d like to see the scheme put on hold, and Bee Network funding properly applied for so this section can be done. The people there did not know that Hyde Road is a future “busy bee” scheme and would need doing at some point, so it makes sense to do this section now.

I wonder when we’ll finally start to see all council schemes actually include cycling from the very start, and include locals too. The past few schemes (MSIRR, Princess Road, Great Ancoats Street) have not had consultations, they have had sessions telling us “we’re doing this”. I hope future schemes can be more inclusive.